Surah Grumet used to be a family doctor at a clinic in the Bronx. “It always felt like I was trying to catch up,” she said. “I was always falling behind, and it was so stressful. And it was really hard to bring up my two girls, to be there for them, and still be able to practice medicine the way that I wanted to.”

Now, she lives in a suburb of Raleigh, N.C. She still practices medicine, but has no office or clinic. Instead, she works with a Durham-based practice called Doctors Making House Calls.

Grumet puts her girls on the school bus and gets in the car just before nine. Her patients are frail elderly people with multiple chronic illnesses: memory loss, heart and blood pressure problems, arthritis that makes mobility difficult.

Grumet works full time, but on her own schedule. She can spend 15 minutes with a patient, or nearly two hours. She’s home before the school bus and completes her patient notes and paperwork while her girls do homework. She makes $70,000 more than she did when she worked in the Bronx.

How is this possible? In a world where many doctors struggle to make money seeing four patients an hour, how can they run a successful practice driving to patients’ homes and spending all the time their patients need?

Before 1950, nearly half of all doctors’ visits in America were house calls. But then the country began building big hospitals and luxurious doctors’ offices, and doctors acquired sophisticated equipment they couldn’t put in a medical bag. Medicare and Medicaid reimbursement systems made home visits untenable.

But the house call is now a better idea than ever.

To cut America’s health care costs, it helps to look at the most expensive patients. Medicare spends a third of its budget caring for chronically ill people in their last two years of life. This group is growing fast, and growth will accelerate; the first baby boomers are now turning 70.

The expense largely comes from hospitalizations, at an average cost of $12,000. So whatever keeps these patients out of the hospital (or out of expensive nursing homes) will save money — and also, of course, greatly improve the patient’s quality of life.

For a frail elderly person, going to a doctor may mean that a relative takes a half-day off from work. An ambulette must be hired. The wheelchair may not fit in the doctor’s office. As a result, old people often don’t get routine care — and eventually land in the emergency room. 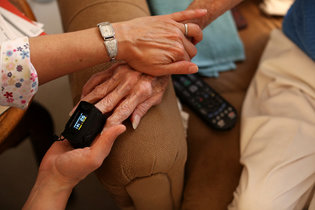 Dr. Grumet’s patients are frail and elderly.CreditTravis Dove for The New York Times

House calls provide that care. One study from 2014 found that for frail elderly people, house calls saved Medicare $4,200 per person per year.

Medicare, then, has a big incentive to use house calls. So do hospital systems that can capture the savings. One is Sutter Health in Northern California, which runs the successful Advanced Illness Management program. Another is the Veterans Affairs system, which established Home Based Primary Care in 1972. The program has the highest patient satisfaction rate of any Veterans Affairs service, has cut overall costs for patients in the program by nearly 12 percent and reduced hospitalization of them by one quarter.

But most hospitals are fee-for-service: they benefit from having more patients, not fewer. Today two-thirds of doctors are employed by hospitals, which buy practices in part to require doctors to send them patients. And that percentage is growing fast.

For house calls to spread, they must be feasible in a fee-for-service universe.

That’s the purpose of Independence at Home, an experiment of the federal Center for Medicare and Medicaid Services. (It’s one of numerous Obamacare experiments in paying for quality of care, not quantity.) Independence worked with 15 medical practices to give them part of the money saved by house calls. Over all, it has saved Medicare $25 million in its first year and $10 million in its second. (A bill in the Senate would make the program permanent.)

About half the participating practices did well enough on quality and savings to earn a share of the funds not spent. One is the Medical House Call Program at MedStar Washington Hospital Center. K. Eric De Jonge, its founder (and incoming president of the American Academy of Home Care Medicine), said the program ran at a loss until Independence at Home’s first year, when earnings from the pilot made up 40 percent of the entire program’s revenues. “This converted us from operating at a loss to being close to a break-even operation,” he said.

Shohreh Taavoni is a co-founder and chief medical officer of Grumet’s group, Doctors Making House Calls. “I had a patient who, before I took care of her, was in the hospital every two months,” Taavoni said. “She has congestive heart failure and labile blood pressure. Her daughter emails me saying ‘her breathing is abnormal’ or ‘her blood pressure is up, or down.’ I go over within 24 hours, adjust her medicines a little, and we manage to take care of it. Since I started taking care of her 10 years ago, she hasn’t gone to the hospital at all.”

A home visit can be better medicine in other ways as well. “Falls are the single most concerning problem of the frail elderly population,” said Taavoni’s husband, Alan Kronhaus, the group’s other co-founder and chief executive. “You can see hazards in the house. What the refrigerator is filled with. What the pill bottles are filled with — or not.

“Patients in their own environment are far more relaxed and forthcoming with meaningful information,” he said. “You get a lot closer to the reality of the situation, and you spend the time.”

De Jonge argues that seeing a patient at home is crucial for understanding her important nonmedical needs, and getting her the right social support and daily personal help. A study of the Mount Sinai Visiting Doctors Program in New York, for example, found that it reduced patients’ pain, anxiety, depression and fatigue. 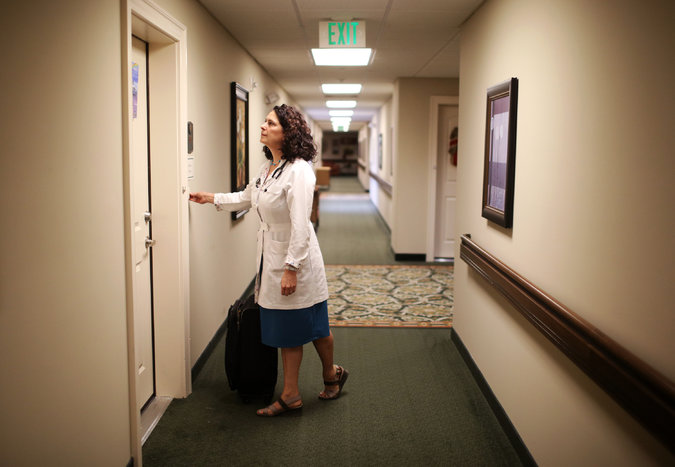 Time is another advantage. House calls eliminate no-shows. So doctors don’t have to do the double- and triple-booking that can lead to seeing 30 patients per day. “We say, ‘the doctor will be there Tuesday morning,’” said Kronhaus. “If the first patient is more needy, you can just spend more time. The other patients are there in their homes doing what they normally do. They’re not sitting in a cold waiting room reading Highlights for Children and getting pissed off.”

That sophisticated equipment that helped put an end to house calls? Now most of it is mobile, too. Doctors Making House Calls contracts with companies to bring X-ray machines or phlebotomists to patient’s homes. “The only thing we can’t do is a CT scan or M.R.I.,” said Taavoni. “But neither can doctors’ offices.”

For some patients, especially those with dementia, going to the doctor — or far worse, the hospital — is itself a medical issue. They can get disoriented and upset. Some patients find themselves discharged from the hospital into a nursing home — where no one wants to be — purely to be able to see a doctor. And, of course, hospitals and doctors’ offices harbor germs especially dangerous to someone frail. House calls solve these problems.

House calls have some disadvantages for doctors. One is driving. When Grumet first started, she might spend hours in the car each day. But now that the practice has 75 clinicians — and she has seniority — she can focus on a small area. “Most of my home visits are within five miles of my house,” she said.

Grumet, like other Doctors Making House Calls physicians, is an independent contractor and can work as much she wants, within limits. She pays the practice half her earnings for overhead. She earns considerably more than she did as an office doctor in part because Medicare reimburses home visits at a slightly higher rate. And because the practice was built around house calls, there is little infrastructure. So Grumet’s 50 percent is far less than the 64 percent the average family doctor spends on overhead.

Doctors Making House Calls is one of the few house call practices that was profitable before the Independence at Home pilot. The lower overhead was crucial. Another advantage has been that most of its patients are in assisted living facilities, where a doctor can visit 15 patients at home in one building. (Traveling from patient to patient makes it much harder to show a profit.)

Also, the group charges patients seen in individual homes a $95 visit fee. (There’s no visit charge for patients in assisted living, or for services like X-rays.)

Medicare doesn’t cover the visit fee — so that cuts out poor people. But many middle class families choose to pay it. “We’re not Rockefellers, but this was a nonissue,” said Juliette Dais, who took care of her mother, Adeline W. Dais. “We didn’t have to wait, didn’t have to go out when there were issues in the middle of the winter and she didn’t feel like going. This made a huge difference in the quality and longevity of my mother’s life.”

One common criticism of house calls is that America is desperately short of primary care doctors — so why cut in half the number of patients they can serve? The answer: If physicians could make more money, control their schedules better and spend a satisfying amount of time with patients, more might choose that life.

”We can do X-rays, blood tests, ultrasounds and fancy medical care,” said De Jonge. “But also the humane and compassionate care people need when they’re in their most vulnerable stage of life. It’s the kind of care you’d want for your loved one and your family.”